The Charleston Coliseum & Convention Center expansion and renovation was a transformational project for both the city of Charleston and West Virginia.

Our team built on the strong authentic character of Charleston to remake the Charleston Convention Center into a more efficient, sustainable, dynamic, and iconic best-in-class destination.

The design of the expansion and renovation of the Charleston Convention Center was inspired by the story of West Virginia. Defined by a rugged landscape, the early history of the state was dominated by extractive industries: salt, coal, timber, and trapping. This set the local character. With a foundation rich in resources, manufacturing added value to the raw materials, with crafts like glass-making and industries like chemicals and energy. This attracted a rich diversity of immigrants and a culture of craftsmanship that set the urban character. The economy is shifting from industry and service to information and technology. Again, the landscape and industry that shaped the region gives Charleston real advantages to exploit. The Creative Class, critical for the information and technology age, can live and work anywhere - what they want is access to the outdoors, real places with real character, and continuous education and entertainment.

Our design started with an organizational concept inspired by this history. The Kanawha River is the social organizing link throughout the region, with settlement zones developing on whatever flatland the river provided, creating nodes of activities among the hills and valleys. The renovated Convention Center is a building that emerges from this iconic landscape, with the architecture and topography working together. The Convention Center also has distinct active nodes to celebrate each activity; arena, convention, and banquet. These nodes are connected like the hills and cut-rock faces that are seen throughout the state, as people work to connect to each other through the landscape.

The first critical design objective was to create separate entries and identities for the arena and convention center. This allowed for simultaneous events and clarity of use. For the Convention Center to thrive, it needed a real ballroom assembly space. Located overlooking the Elk River, the ballroom pre-function space is the most dramatic feature of the center. Together, the three glass-enclosed nodes - arena lobby, convention lobby, and ballroom - define a unique Charleston event campus. As described above, the spaces that connect these nodes are inspired by the hills and cut-rock faces that connect the towns along the Kanawha River. With the building emerging from the landscape and expressed as cut-rock walls, the connecting areas were designed to be expressive and economical backdrops to the glass-boxed nodes.

While the expansion transformed the southeast to the middle of the northern zone of the site, the existing building mass still dominates a portion of the northern and eastern campus. The dominant expression along these existing façades is the landscaped berms. As we imagined the building expression emerging from the landscape, a strategy developed to transform these berms to reflect, at the pedestrian level, the overall design theme. Above the level of the berms, the concourse level windows open up the façade and provide a much needed break in the massing. The upper part of the arena is painted in two tones to match the new building, playing off the different faces. The north, south, east, and west faces painted a lighter shade; and the northeast, southeast, southwest, and northwest faces a darker shade. Dramatic exterior color-changing lighting on the northeast, southeast, southwest, and northwest faces transform the look and feel of the center into a fun and festive landmark. 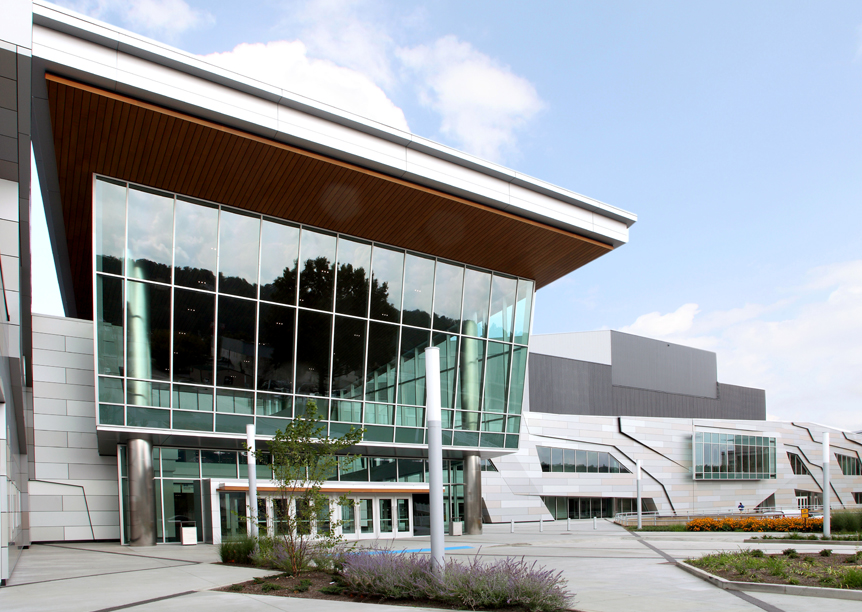 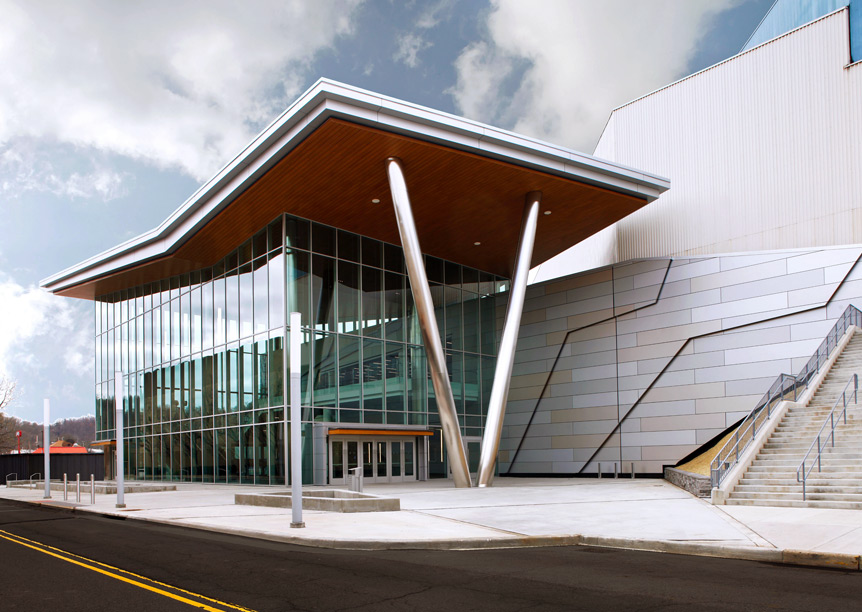 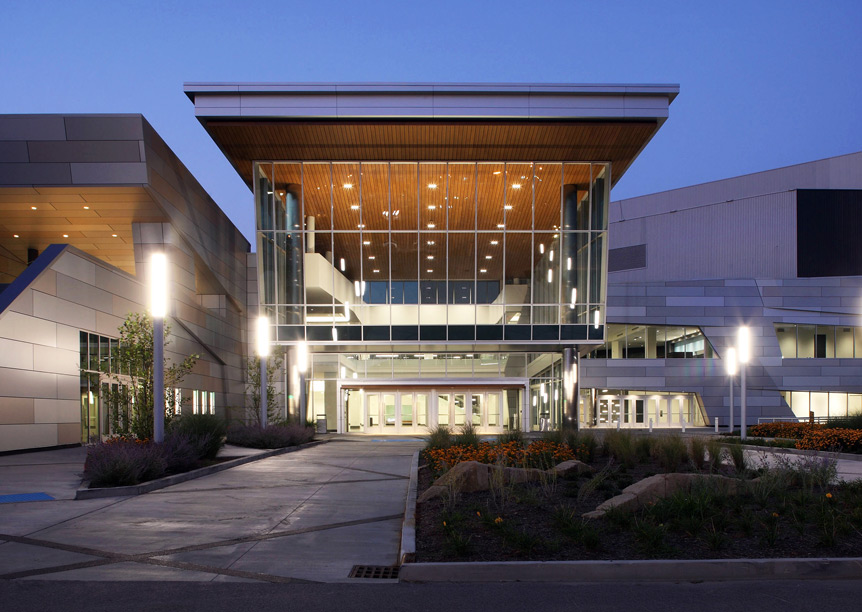 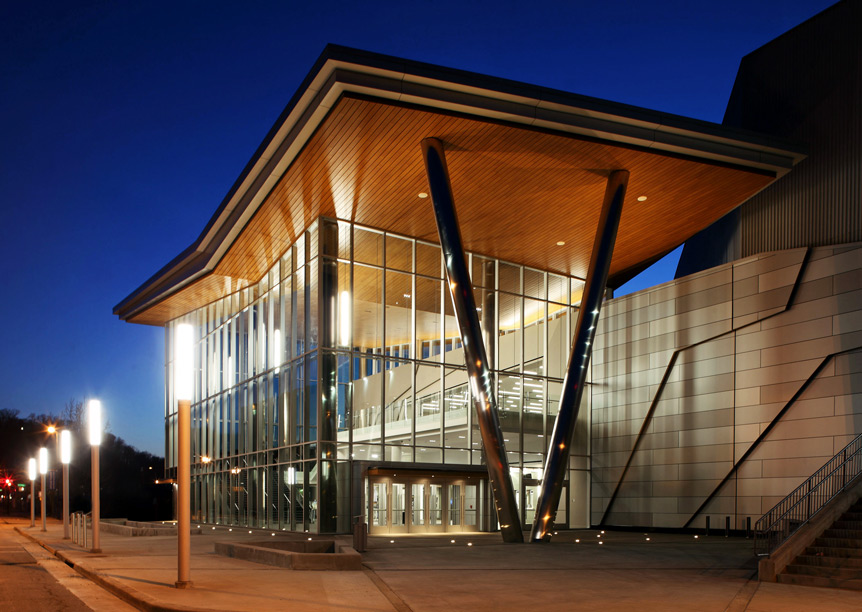 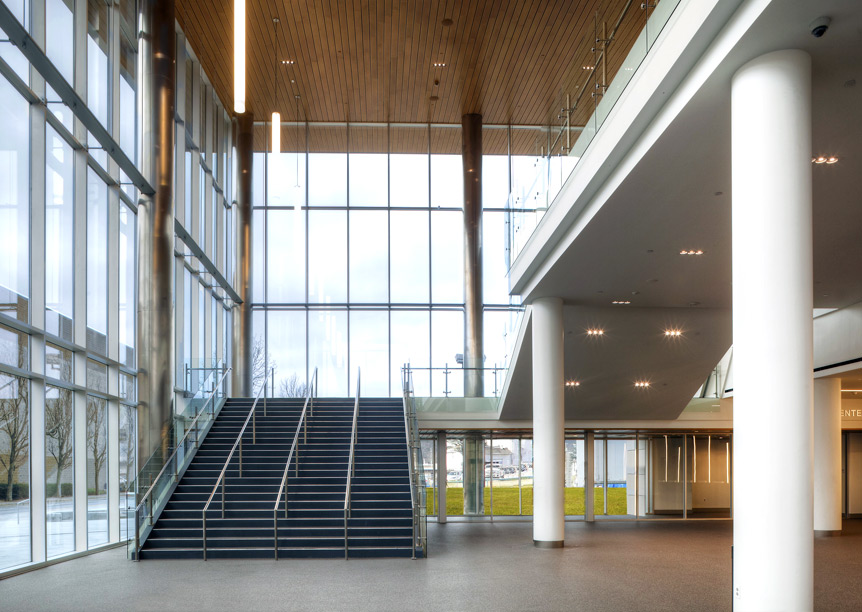 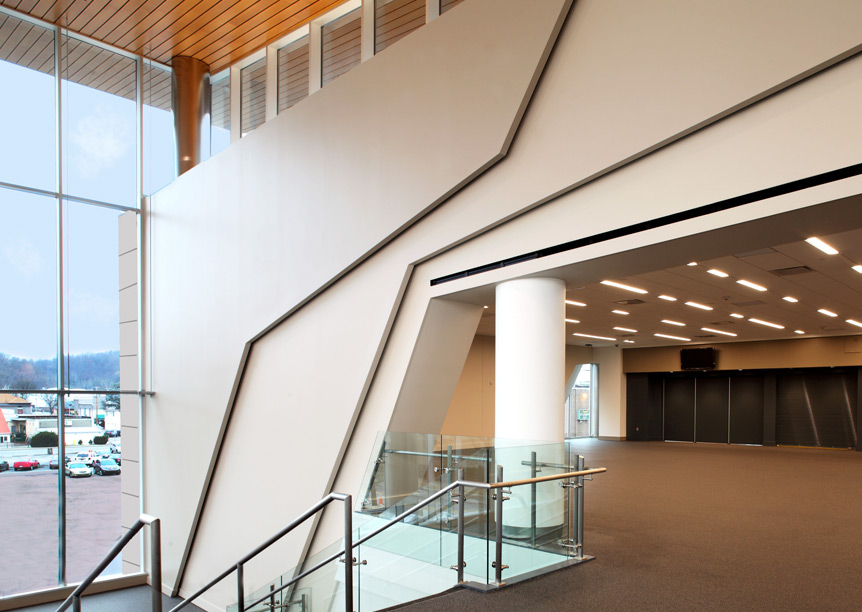 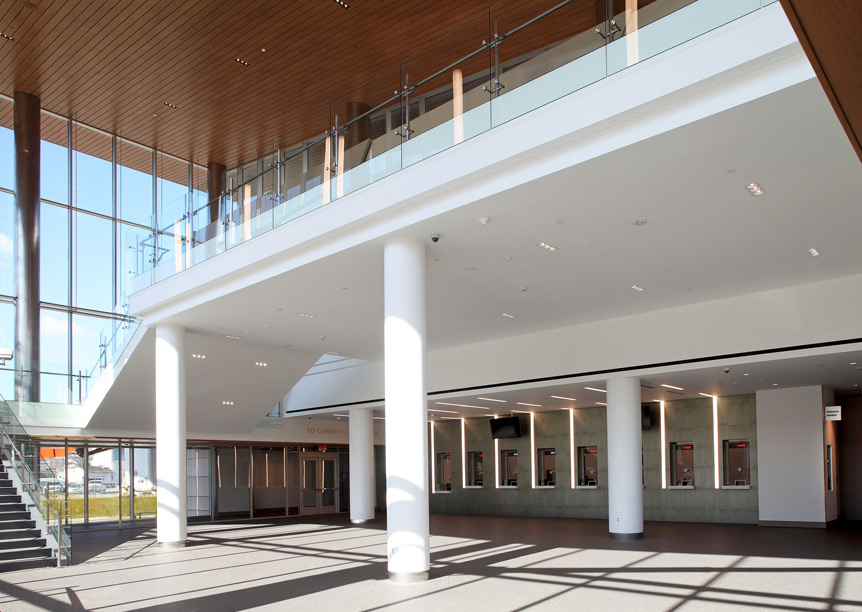