The proposed Charleston EDGE mixed-use facility contains twelve residential units, with retail on the first level, and program and amenity space on the roof.

The purpose of EDGE is to provide a facility that will serve to provide both affordable downtown housing and collaborative community space, which will support an innovative program that aims to attract and retain young talent to the Charleston community.

The goal of the EDGE complex is to serve as a catalytic incubator and beacon for visible change in the urban village district, where all the residents are participants in a program of Early Dynamic Guided Engagement (EDGE).

The project commenced with visioning and planning sessions, where the design team obtained input from various community leaders and young professionals to investigate scenarios to optimize the impact and success of the potential development. After investigating various potential locations, which included developing scenarios for both new construction and renovation, it was decided to approach the project as an adaptive reuse of a dilapidated structure at 170 Summer Street.

The building that was selected for improvement is the site of the former B&B Loans. It is also the former DuPont Hotel. The National Register nomination lists the construction date as c. 1920, while the 1933 Sanborn Map lists it as 1923. The building is listed as a contributing building in the Downtown Charleston Historic District. The three-story masonry commercial building is described in the National Register Nomination as a Neo-Classical Revival Style. The first floor is the full footprint, and was previously used for a variety of commercial establishments, while the upper two floors have a cut out on the south side to make a light well, and previously operated as a hotel/boarding house.

The design intent of the EDGE project was developed to compliment the historic character of the existing building, while maximizing the potential redevelopment of the second and third floors as residential space that addressed the needs and aspirations of the EDGE program participants. A residential entry, including an additional egress stair and elevator access, was added to the rear of the building, adjacent to the parking structure off of Brawley Walkway, while the existing residential entry was maintained.

Various solutions for the overall building configuration were considered that maximized the residential density, while respecting the previous hotel layout and circulation. During this planning process, the design team also considered various unit options. Loft type units were considered, as well as small flats with a bedroom that was not adjacent to the outside wall. Ultimately, it became clear that the majority of potential EDGE program participants preferred a plan that included a one-bedroom space with a separate office area. A typical residential unit plan was developed to reflect the programmatic requirement in an efficient manner, and then modified to meet the constraints of the existing structure, creating a variety of unique unit types that all respond to a shared vision.

To support the community engagement portion of the program, flexible and adaptable meeting spaces were added on the roof level. The structure designed to accommodate this space was set back from the major building elevations to diminish the impact of the new construction on the historic nature of the building. This approach created the opportunity for a large exterior gathering space on the roof, and permitted the exterior design of the gathering space to reflect the contemporary aesthetic of the residential units. 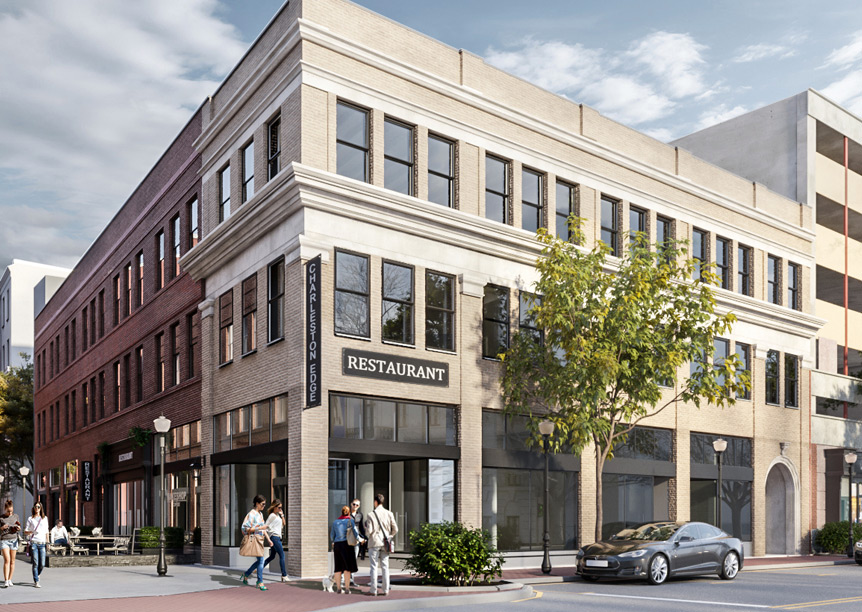 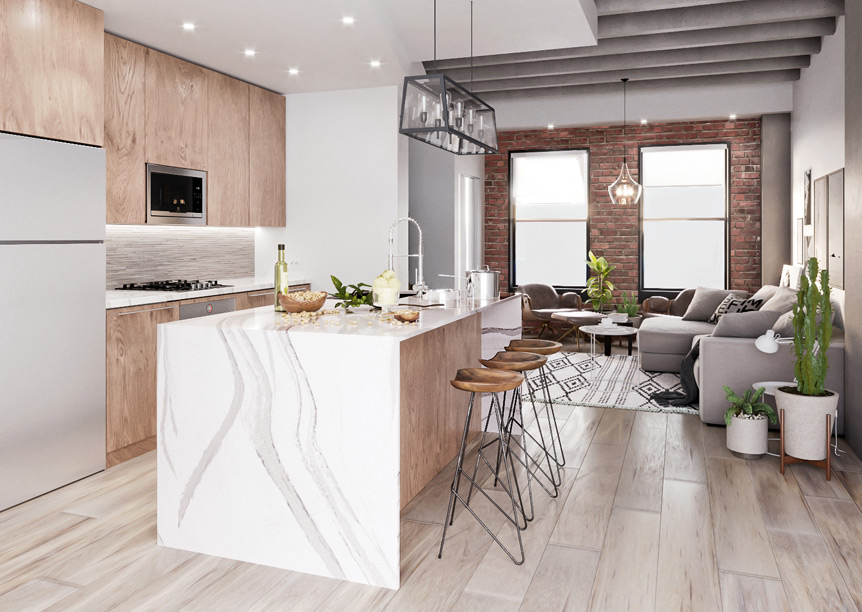